This morning I heard about Git 1.8 being available. I headed over to http://git-scm.com/ on my MacBook Pro and clicked Download and was all set in under a minute. I came into work this morning thinking I’d have a similar experience on my Windows VM. I went to the site and saw Latest stable release 1.8.0 but when I hit Download I was greeted with this screen telling me I’m downloading a 3 month old release of Git 1.7.11.

Three months old? No, I decided to pull the source and build the latest version of Git locally. Here’s how I did it.

You’ll need to download and install msysgit from https://code.google.com/p/msysgit. Be sure to install to C:\msysgit. This will also download and compile an older version of Git.

After the install completes you’ll be sitting at a MINGW32 command prompt. Type exit to close this window.

On your desktop (or anywhere) create a shortcut with the following target:

Double-click this shortcut and you should see a PowerShell prompt that looks something like this:

You should see the following result:

I spend all day typing and anything that can cut the amount of typing I do is a plus for me. I create an alias to call git by typing just a g. It’s a small saving but it really adds up.

When Notepad opens type the following alias and save and exit: 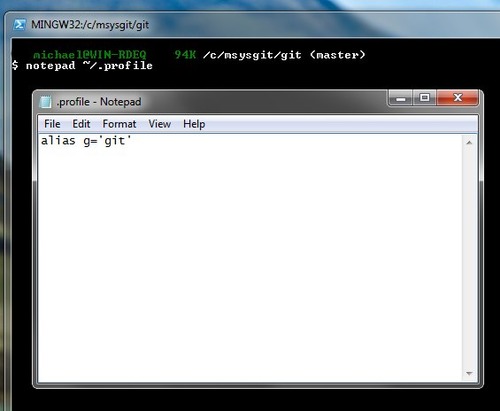 You should now have the latest version of Git running on Windows via PowerShell with a spiffy alias that allows you to access git with a single character: